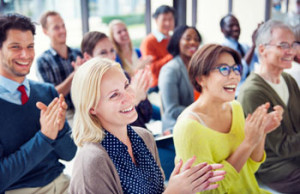 The year was 1999. I had recently entered the market as a professional voice-over guy and wanted to do commercials. As I was driving around town one day, I was listening to the radio, strangely enough, to hear the commercials. I know, that’s a bit weird.

I wanted to know, however, how the voice actors voiced the scripts. I figured, if they were getting the gigs, I wanted to learn from them so that I could, too. And what I learned shocked me.

As I listened to them, I tried to say the words along with them, in the same way that they said them. A couple of the commercials were really low key. The type where there were two people sitting at a table having a casual conversation with a cup of coffee in their hand. The voices were cool, calm, and collected—but the energy that it took to produce that sound was very high. The energy was certainly there, but I couldn’t hear it in their voices.

That showed me that our audiences perceive us as lower key than we think that we are.

I put that to the test several months later. I had an audio studio in my office, and that included a phone patch. I did some audio recording for a network marketing company and, on this particular day, five of their top leaders called in to record testimonials for a telephone hotline.

After several takes, each gave me a version that I could use. It was low energy, but it would work. I then said, “Great. We’ve got a take that we can use. Let’s have some fun. Why don’t you give me a take that is way over the top. Go crazy. Give me all you’ve got.” In each case, this is the take that I used. This was not because it was full of hype. It was not. This was not because it was goofy. Again, it was not. This was the only take that sounded real. That sounded like they really believed what they were saying. They thought that they were far too animated and energetic for prime time, yet that was the one that sounded normal.

They came across as being less expressive than they thought.

What does that mean for you and me?

The bottom line here is—give it more energy and expressiveness than you think is appropriate. It is probably just right. 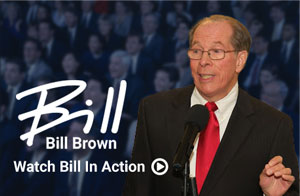 In this essential guide, Bill shares vocal care tips (and even a few industry secrets!) gleaned from his many years as a radio broadcaster, voice-over artist, and public speaker.