Connect with your market by giving your message the right voice. 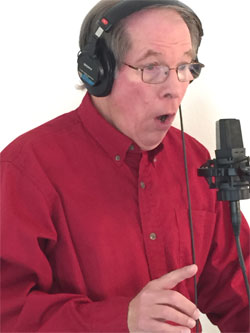 You know your market. You’ve crafted and honed the perfect message. Now, you need the right voice to deliver it.

Bill Brown’s solid, professional style will help you connect with your target audience.

Bill does not come from the acting world. He comes from the technical and corporate arena, which means that he understands how business communication works. He isn’t trying to win an Oscar. He wants to convey a message. Your message. And that includes getting the pronunciation right, including, and especially, with technical terms.

Bill specializes in narration, with extensive experience in the corporate/industrial arena. With 17 years in technical industries, he can handle terms like bismaleimide and polybenzimidazol with ease. (Yes, he really does know what they are, too!)

Bill also has some fun character voices that you’re sure to find interesting. And don’t miss his commercials! (Did you catch his Del Taco spot?)

Does your company’s phone system make the right impression with your callers? Bill can provide a strong, professional image for your business. His warm yet strong and confident style communicates to your customer that they have come to a company that cares and one that is an authority in its field.

Bill has a strong stage presence and knows how to run a meeting. Whether your event calls for light, funny, serious, or formal, Bill has the personality to make it memorable!

His resume includes the awards programs for the Protos Awards, the Helios Awards, and the Golden Reel Awards, an international video and multimedia competition.

And if you attended the Awards Gala for a recent Newport Beach Film Festival you saw him in action as he presented four of the awards. One producer commented “your voice reverberated throughout the room.”

He is available for a wide variety of events including corporate meetings and conventions, awards programs, and trade shows.

Imagine that you are ready to speak at your corporation’s or association’s big event. As you are ready to take the stage, you hear a deep booming voice seemingly coming from nowhere “and now ladies and gentlemen, please welcome …”

Adding this voice to your meeting or awards program adds a level of professionalism to your event. It makes it seem like a Hollywood awards program. It elevates the program and makes your award winners feel even more special.

Connect with your audience by giving your message the right voice. Contact Bill at (307) 622-6259 for voice services.